Zero Dark Thirty has picked up the best film award from the EDA, Alliance of women film journalists. The film also garnered a directing award, an actress award as well as screenplay and cinematography award. 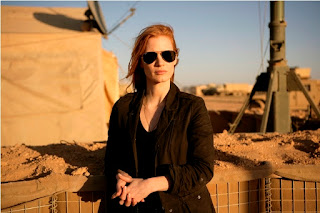 Best Actress in a Supporting Role

Best Actor in a Supporting Role

Lucy Alibar (and Benh Zeitlin) - Beasts of the Southern Wild

AWFJ Award For Humanitarian Activism - Female Icon Award —
(Presented to an actress for the portrayal of the most positive female role model, or for a role in which she takes personal and/or career risks to plumb the female psyche and therefore gives us courage to plumb our own, and/or for putting forth the image of a woman who is heroic, accomplished, persistent, demands her rights and/or the rights of others.)

This Year’s Outstanding Achievement By A Woman In The Film Industry
(Presented only when warranted to a female who has had a banner-making, record-breaking, industry-changing achievement during any given year — such as Kathryn Bigelow’s Best Director Oscar win, or for an actress having multiple outstanding films released during one year.)

Sean Anders for That’s My Boy

Actress Most in Need Of A New Agent (Tie)

Katherine Heigl - One For The Money
Reese Witherspoon - This Means War

Movie You Wanted To Love But Just Couldn’t

Sequel or Remake That Shouldn’t Have Been Made Award (Tie)

Posted by David Salazar at 8:10 AM