In case you missed our recap for Day 1, click here. 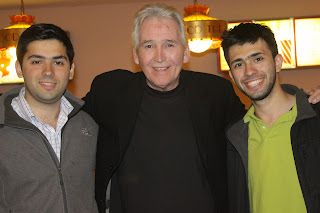 Day two of PIFF had some stronger showing than Day 1. More importantly, "Messenger" screened at the festival and we had a Q & A session.

The awards went to:


I saw two of three and saw the final few minutes of Ecstasy, which definitely looked like a phenomenal film.

Here are our favorites for the day, followed by our three favorite films of the festival.

A film that details the struggle of young boy as he decides on whether to help a stranger who is an outcast in his society. The film is visually remarkable with tremendous performances and a style that both matches the raw intensity of a chaotic South Africa with the youth of its protagonist.

"Mira's Night" Direced by Elyse Kelly
Short and sweet with dazzling effects detailing one girls' capturing of the star spirits. The film takes you on a magical quest of growth and maturity.

"Live outside the Box" Directed by Shu-Hsuan Lin
A workaholic neglects the world outside his office and slowly finds the world around him growing smaller and smaller. Another phenomenal animated film that serves as the ideal metaphor for our society.

Our Favorite 3 from the Festival (In No Particular Order)

1. "1937" Directed by Svetozar Goloviev
A bravura display of tone and technique with strong performances and mesmerizing set pieces.  One suspenseful sequence pits the protagonists through a dark forest as they seek to find the priest that will baptize their child. The cinematography here is top notch, providing the viewer with just enough visual reference to make out the environment and characters, but is dominated by the darkness of night that not only defines the suppression of the world, but creates dread and suspense. The beauty of the sequence is the simplicity with which it is executed. The film, while only 18 minutes long, is permeated with this kind of control, technique, and detail.

2. "The Game" Directed by Marcin Janiec
Death pits a rich man and poor man in a game of chess to decide their fates. The story is riveting in its glorious animation and pacing. The final twist of the story is extremely satisfying and shocking all the same.

3. "Easy Street" Directed by Russell Greene
Blending Comedy and tragedy in a search for justice, this was easily one of the top crowd pleasers in the festival. As the film starts, it builds up to a major interview for this position in clerical law. There is a tense mood as the story starts and then shifts gear as the interview gets underway. Soon after, director Russell Greene gets us comfortable and makes us believe everything is going well. Then he shifts gears away from the hyperbole and exaggerated (but tasteful) jokes that are borderline unbelievable, and moves into the dark territory of the US government's paranoia and dangerous machinations. As I stated in my remarks on the film yesterday, the final imagery is truly cathartic.

I wish the Pittsburgh Independent Film Festival the best of luck in developing after a solid first year!